October 2012 Rock of the Month 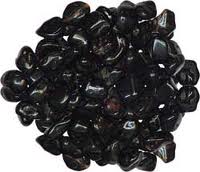 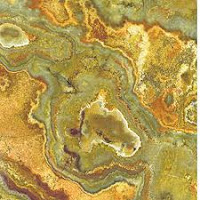 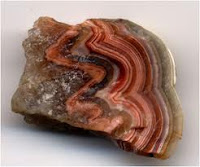 Onyx is a banded variety of chalcedony. The colors of its bands range from white to almost every color except shades of purple and blue. Commonly, specimens of onyx contain bands of black and/or white.

It is cryptocrystalline in form, consisting of fine intergrowths of the silica minerals quartz and moganite. Its bands are parallel to one another; as opposed to the more chaotic banding that often occurs in agates.

Sardonyx is a variant in which the colored bands are sard (shades of red) rather than black. Black onyx is perhaps the most famous variety, but is not as common as onyx with colored bands. 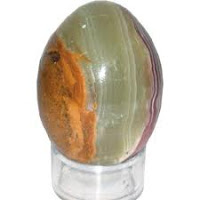 Onyx has a long history of use for hard stone carving and jewelry, where it is usually cut as a cabochon or into beads. It has also been used for intaglio and hard stone cameo engraved gems where the bands make the image contrast with the background.

Onyx was used in Egypt as early as the Second Dynasty to make bowls and other pottery items.  Onyx is also mentioned at various points in the Bible.

Onyx is a member of the silicon dioxide family of minerals and registers as a 7 on the Mohs scale of hardness.

Posted by The Del Air Rockhounds Club, Inc at 8:10 PM