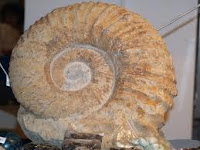 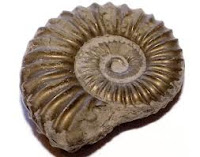 Ammonites or ammonoids (both terms are used interchangeably) are an extinct group of marine invertebrate animals in the subclass Ammonoidea of the class Cephalopoda. These mollusks are more closely related to living coleoids (i.e. octopuses, squid, and cuttlefish) than they are to shelled nautiloids such as the living Nautilus species. Ammonites are excellent index fossils, and it is often possible to link the rock layer in which they are found to specific geological time periods. Their fossil shells usually take the form of planispirals, although there were some helically-spiraled and non-spiraled forms as well. The name ammonite, from which the scientific term is derived, was inspired by the spiral shape of their fossilized shells, which somewhat resemble tightly coiled rams' horns. Pliny the Elder (circa. 79 AD. near Pompeii) called fossils of these animals’ ammonis cornua ("horns of Ammon") because the Egyptian god Ammon was typically depicted wearing ram's horns. Ammonites first appeared in the Devonian Era (circa 400 MYA) and became extinct at the close of the Cretaceous around 65 MYA along with the dinosaurs. Few of the ammonites occurring in the lower and middle part of the Jurassic period reach a size exceeding 9 inches in diameter. Much larger forms are found in the later rocks of the upper part of the Jurassic and the lower part of the Cretaceous, such as Titanites from Jurassic of southern England, which are often 2 feet in diameter and another species of the Cretaceous period of Germany, which is one of the largest known ammonites, have been known to reach 6.5 feet in diameter. The largest documented North American ammonite is Parapuzosia bradyi from the Cretaceous with specimens measuring 4.5 feet in diameter, although a newly discovered 7.5-foot British Columbian specimen, if authentic, would appear to trump even the European champion 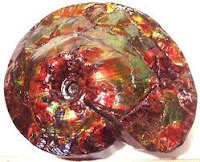 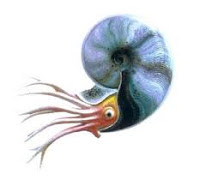