March 2011 Fossil of the Month 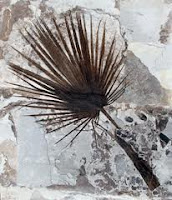 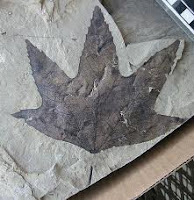 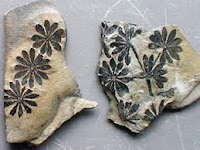 Paleobotany, from the Greek words “paleon”, meaning old and "botany", meaning the study of plants), is the branch of paleontology or paleobiology dealing with the recovery and identification of plant remains from geological contexts.

A plant fossil is any preserved part of a plant that has long since died. Such fossils may be prehistoric impressions that are many millions of years old, or bits of charcoal that are only a few hundred years old. Prehistoric plants are various groups of plants that lived before recorded history (before about 3500 BC). Plant fossils can be preserved in a variety of ways, each of which can give different types of information about the original parent plant.

1. Adpressions (compressions-impressions). These are the most commonly found type of plant fossil. They provide good morphological detail, especially of dorsiventral (flattened) plant parts such as leaves. If the cuticle is preserved, they can also yield fine anatomical detail of the epidermis. Little other detail of cellular anatomy is normally preserved.

2. Petrifactions (anatomically preserved fossils). These provide fine detail of the cell anatomy of the plant tissue. Morphological detail can also be determined by serial sectioning, but this is both time consuming and difficult.

3. Molds and casts. These only tend to preserve the more robust plant parts such as seeds or woody stems. They can provide information about the three-dimensional form of the plant, and in the case of casts of tree stumps can provide evidence of the density of the original vegetation. However, they rarely preserve any fine morphological detail or cell anatomy. Subsets of such fossils are pith casts, where the center of a stem is either hollow or has delicate pith. After death, sediment enters and forms a cast of the central cavity of the stem.

4. Authigenic mineralization. These can provide very fine, three-dimensional morphological detail, and have proved especially important in the study of reproductive structures that can be severely distorted in adpressions. However, as they are formed in mineral nodules, such fossils can rarely be of large size.

5. Fusains. Fire normally destroys plant tissue but sometimes charcoalified remains can preserve fine morphological detail that is lost in other modes of preservation; some of the best evidence of early flowers has been preserved in fusains. Fusains fossils are delicate and often small, but because of their buoyancy can often drift for long distances and can thus provide evidence of vegetation away from areas of sedimentation.